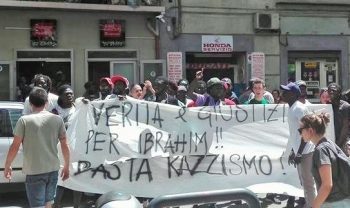 “A 24-year-old boy died yesterday in Naples, killed by racism and bad healthcare”: this is what reported on Facebook by the members of Ex Opg, a former psychiatric hospital, now abandoned and squatted by a goup of people in the Materdei district of Naples. The boy – Ibrahim Manneh, 24 years old- from the Ivory Coast, lived in Italy since 2010. He died in the night between Sunday 09th and Monday 10th of July, in the Loreto Mare hospital. The activists who denounced the facts knew the victim: Ibrahim Manneh went several times at the free legal point organized in the Ex Opg, giving an help with the translations, since he knew five languages , along with other free services for the population.

But what happened to Ibrahim Manneh? And why members of Ex Opg talk about racism and bad healthcare? We reached them on the phone, to understand what happened.

On Sunday the 09th, around 12:00 am, Ibrahim Manneh begins to feel pain in the stomach, and goes to the Loreto Mare Hospital. Without any analysis, doctors make an injection to the man and tell him to go back home. But the situation doesn’t improve: in the evening Ibrahim calls the brother, who comes with some friends. They go to the nearest pharmacy in Porta Garibaldi. The pharmacist, perhaps realizing the seriousness of the situation, calls the ambulance several times, but never opens the door. The ambulance doesn’t come. A police car comes nearest and the boys ask for help, but the policemen ignore them, while Ibrahim is on the ground.

The guys ask to a taxi driver in Mancini square to go to the hospital: the driver before specifies that he want ten euros and then, when the boys show him the money, refuses to take them to the hospital because he doesn’t have “police permission”.

The boys run to another pharmacy in the area: the pharmacist, without making a visit, suggests buying some medicines, for an amount of 15 euros. The guys follow the instructions and bring Ibrahim back home, taking medicines. The young man begins to vomit.

At midnight, the boys contact the acitivists of Ex Opg, who immediately call an ambulance asking to go to the young man’s house. From the hospital they answer they can’t go “for a guy who vomits: he has to come by himself”, despite the activists say Ibrahim can’t move. Without knowing what to do, the friends of the young man raise him and bring him unconscious to National Square, where the local healthcare structure is located. On the way they meet another police car and ask to the policeman for help: even in this case, their request is ignored.

Once to the local health care structure, the doctor visits Ibrahim and immediately realizes the terrible conditions of the boy. He calls an ambulance, and finally it comes.

Ibrahim arrives at the Loreto Mare Hospital at 02:30 am and moved urgently to the operating room.
At 11:00 am, doctors notify the death of Ibrahim to his brother. Listening to them, it wasn’t possible to operate the man, since he arrived to the hospital too late. He died at night, alone. The terrible announce was given to his brother after hours from the death, and he was not allowed to see the body or speak to the doctors until the intervention of the activists.

What has happened is very serious. But it doesn’t end here.

Ibrahim’s friends, brother and members of Ex Opg decide to report the facts to the police, but officials refuse to accept the denouce, claiming it must be done at Loreto Mare Hospital. Meanwhile, Ibrahim’s friends go to the hospital, and the administrative personnel of the healthcare structure call the police, which order them to go away.

The activists come back to Loreto Mare hospital to denounce, as indicated by the police. The police men outside the hospital first identify the lawyer who is part of the group of activists, and then declare: “You have to force them go home, otherwise we will intervene, then we don’t want to know anything about torture offense”. They also add that “the complaint must be filled at the Police Headquarters”.

We join the denounce, remembering also that the only concrete help came from members of a group who, as many other realities that promote grassroots social interventions, is constantly attacked by the institutions, the same institutions that in this terrible story haven’t fullfill their duties.