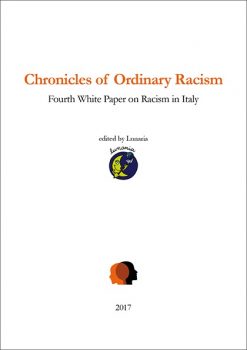 Ordinary, legitimized and even flaunted; such is racism of the 4.0 age. The rhetoric of fear, instrumental politics, forms of institutional racism, misleading information, discrimination and widespread racist violence find in the net a space of encounter and mutual contamination.

Stigmatizing and aggressive discourses encourage discriminatory acts and behaviors in the real world, but the opposite may also happen: manifestations of intolerance, xenophobia and racism are “documented” on video, displayed and claimed on-line. The two Romani women locked in a cage in Follonica last February, the barricades built to prevent the arrival of 12 women and 8 children seeking asylum in Gorino in October 2016, and the aggression committed against an asylum seeker in Acqui Terme last month are just a few examples.

1,483 acts of discrimination and of physical and verbal violence, monitored between January 1, 2015, and May 31, 2017, are documented in Chronicles of ordinary racism. Fourth white paper on racism in Italy by Lunaria in the white book.

Racism has killed in Italy many times

Muhammad Shazad Kan, for example; a 28-year-old Pakistani citizen, beaten to death in the Roman district of Tor Pignattara on September 18, 2014. Roberto Pantic on the night of February 21-22, 2015 in Calcio (Bergamo), was killed with a gunshot while he in his caravan, sleeping. Sare Mamadou was killed by a shotgun wound in his chest because he “dared” to steal a rotten melon in a field, in Lucera on September 21, 2015. Emmanuel Chidi Namdi, a 36-year-old Nigerian asylum seeker, died on July 5, 2016 in Fermo because he “dared” to rebel against an insult to his partner. On the other hand, Yusupha Susso, a 21-years-old student from Gambia, insulted, beaten and shot in the head in the streets of the Ballarò district in Palermo, by a group of men on April 2, 2016, managed to survive. He had “dared” to protest against two young people on a scooter who had almost run him over. The mainstream press hastingly downplayed the racist aggression into simple “street brawl”.

Sometimes racism is explicit, more often media omit uncomfortable news or launch stigmatizing campaigns. The landings of migrants in southern Italy, the humanitarian crisis in Greece and along the so-called Balkan Route, the judicial investigations into the management of reception centers, have been transformed into a generalized and stigmatizing criminalization of migrants, refugees and foreign nationals from third countries permanently resident in Italy, with a particular stigmatization against citizens of Muslim faith, coinciding with the numerous attacks that unfortunately affected Europe.

There are many cases mentioned in the report: from newspaper headlines urging us to “chase out Islam”, to the lexicon that has replaced the word “clandestine” with the apparently more neutral one of “migrants”; to the distracted forgetfulness of Faye Dame’s death in the Hotel of Rigopiano, then rigorously remembered as “having a clean record”, to the rediscovery of “perceptions” of insecurity that would prevail in an undefined “common sense”, to the return of the more “traditional” stigmatizing associations: immigrant=criminal=terrorist=plague-spreader=rapist.

The novelty, compared to the past, is the delegitimation of solidarity practices within civil society; from the reception of asylum seekers in our cities to the NGOs that provide sea search and rescue operations to solidarity activities near the borders.

The most striking omissions include the murder of Mohamed Habassi in Parma on the night of 9-10 May 2016. Among the “unforeseen” incidents was a prime time TV show in which the Romani were defined by a guest in the studio as the “dregs of society”.

The responsibilities of the state institutions and politics

According to Lunaria, at the root of the outburst of racism that especially since the beginning of 2016 has returned to plague Italy, there is a clear responsibility of politics that, as it has already happened in the past, has resuscitated the ancient securitarian recipe by adopting increasingly restrictive migration and asylum policies; the two Orlando-Minniti laws passed last April were preceded by the choice to stop operation Mare Nostrum, and were subsequently followed by subjecting international aid to the goal of preventing at all costs the arrival of migrants.

Political propaganda is also harmful: that of the parties that exploit feelings of resentment that inform “the man of the streets” as well as institutions, and which agitates the specter of fear to justify their inability to provide credible and long-term responses to the current political crisis.

You can download the english version of the white book here.

Lunaria is an Italian Association for Social Promotion. It was created in 1992, and since then it is a non governmental organization, autonomous from religious and political affiliations and not-profit. Our activities focus on research and action research, training and communication on several social issues such as fair economy, the development of third sector, anti-racism and the study of migration flows, the links between democracy and participation, the importance of informal and non formal education through the promotion of international voluntary service activities. We test new forms of active citizenship and non-violent social change inspired by the principles of justice, solidarity, democracy and, nationally and internationally, the respect of human rights for all.

Since 1996 Lunaria has been carrying out research activities, information and campaigns on the theme of migration against racism. Full guarantee of citizenship rights and asylum, Reform of the law on citizenship, closure of Identification and Expulsion Centers, today Permanent Residence Centres for Repatriation, and combating all forms of discrimination and racism are the main objectives of campaigns conducted in recent years.