The return of race in Italy 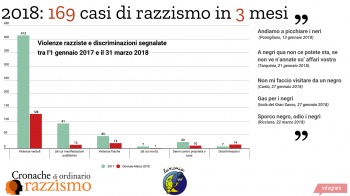 Racism preceded and followed the national election in Italy of 4 March under the banner of “return of the race”.

We report this in a new dossier edited by Lunaria, starting from the 169 cases of discrimination and racism that we documented between January 1 and March 31, 2018, trying to highlight the most worrying trends, the most serious racist violence , the virality of the network that can be violent, but can also protect, some examples of good anti-racism practiced on a social level and in the world of information. Good news in pills that could multiply, even in environments less close to the anti-racist world.

It will depend (also) on our collective capacity to rebel.

The dossier is available here.

We publish the introduction below.

The above sentences were not pronounced during the election campaign. In Pomigliano, Tarquinia, Cantù, Pavia, Rome and Riccione they accompanied six racist attacks. In Cantù they were pronounced by a woman who refused health care from a “black” doctor. At Isola Gran Sasso they were written on a channel of the gas network near a reception center.

The return of the “race” [1] therefore went well beyond the famous radio statement of the then candidate and today governor of the Lombardy region Attilio Fontana: “We must decide whether our ethnic group, if our white race, if our society must continue to exist or if it must be canceled”, Radio Padania, January 15, 2018.

In the two most serious cases of violence in the first three months of the year, the facts have spoken on their own: Luca Traini has chosen Macerata on February 3 to shoot wildly against people who are strictly black, injuring six. Roberto Pirrone killed Idy Diane in Florence on March 5, choosing him walking on a bridge after meeting other people on his path. In both cases we were in full electoral campaign. The same as the words of Fontana.

The shotgun murder of Soumalya Sacko, a 29-year-old Malian, took place in San Calogero after the vote and is yet another sign of how the extreme precariousness of agricultural working conditions in certain areas of the South and the climate the general policy render null the value of the life of immigrants, especially those of Africa. And we can not fail to mention it even if this report contains data and reports that stop at March 31, 2018. If the media and the political discourse of ministers destined to manage the issue of migration adopt a harsh and racist and xenophobic language, if this language is relaunched and powered by social networks, tragic cases like that of the Calabrian countryside risk becoming normal.

In our last white paper on racism we highlighted the unwillingness of the public debate and the progressive slippage from trivialization, to normalization, to the legitimization up to the claim and the ostentation of racist violence. In the first three months of 2018 it went further. An electoral campaign full of stigmatization and racist offenses has rewarded, as never before, the forces that most performed the “stick” against migrants, asylum seekers, refugees and citizens of foreign origin announcing expulsions and mass repatriation, the closure of reception centers, the opening of other detention centers and the reduction of citizenship rights to “privileges” for Italian citizens in the provision of welfare benefits. Objectives included in the “government contract” that should direct the policies of the new government.

Today, Italy is soaked more than six months ago of a nationalist, xenophobic and racist poison that, as the above sentences seem to point out, it too easily inspires discriminatory and violent social behavior.

Racism seems to have become a successful logo, not just in the political arena.

We take this into account in this brief dossier from the 169 cases of discrimination and racism that we documented between January 1 and March 31, 2018, trying to highlight the most worrying trends, starting with the reconstruction of the most serious racist violence, occurred in the course and immediately after the election campaign.