An international meeting was held on the 18th and 19th of January, in the framework of the European project Re-You-rEU, coordinated by Lunaria in collaboration with the Greek partner Antigone and the Spanish Gabinet d’estudis socials. 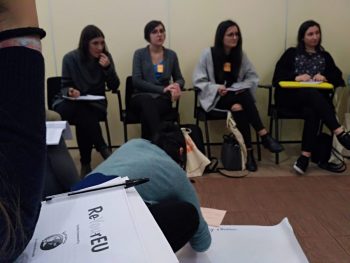 More than 50 Italians, Greeks and Spanish people aged between 18 and 30 met at the Scout Center in Rome, to discuss the results of the national consultation on racism in the three partner Countries – and to design a campaign to raise awareness on human rights and racism to be launched before the next European elections.

The group that participated in the international meeting had different backgrounds: age, interest and contexts of origin. Some were already engaged in social activism, while others decided to participate pushed by a sensibility to the issue of hate speech and the self-interest in wanting to take action to curb it.

The working environment was friendly and participated. Dialogue and the exchange of experiences created the basis for the the conception of about ten hypotheses of online campaigns.

The participants were surprised to recognize that what they experience on a daily basis in their own country it’s not a national problem but a widespread issue at European level. What moved them most was to feel that their worries were widespread and shared by all. 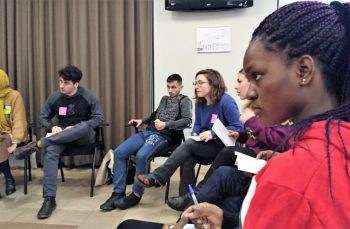 This was the reason for the group’s great strength and union, who inspired and prompted them to get to know each other and to look more closely, to deepen the knowledge of the other countries, to share ideas and opinions about the best communication strategies to be used to limit the spread of aggressive and violent public rhetoric towards migrants, asylum seekers and Rom, and work to produce change on the issue in the societies where they live.

The central part of the meeting was devoted to the analysis of contexts and stereotypes linked in which conflicts are generated and in which hate speech begins.

Consensus emerged on the great responsibility of politicians, who often use a violent and stigmatizing rhetoric as a propaganda tool. Also the negative role of media was underlined: it often acts as a sounding board for political speech. Italians noticed how fact-checking, a widespread tool to deconstruct fake news, is not very used in their country. 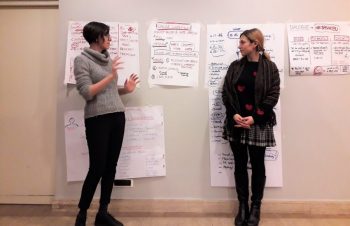 The process of ideating campaigns has started with the identification of topical matters that generate conflict and prejudices, than the group discussed the definition of targets of the message, finally, the selection of key concepts to be used. Working in little groups, the participants discussed many valuable ideas taken from everyday contexts, imagining the ways to turn it into practice, then elaborated scripts and, in one case, even simulating the idea and the tools to be used for the online dissemination.

The last part of the meeting was dedicated to the collection of recommendations that could be addressed directly to the political decision-makers who will assume the responsibility for representing their countries at the European Parliament. Despite the general mistrust towards the possibility of influencing political candidates, the idea to addressing them through a public appeal asking them to protect human rights and promote the fight against discrimination was considered. It has been also proposed to launch a call to voters, asking to choose parties that do not use discriminatory language and don’t have discriminatory proposals. 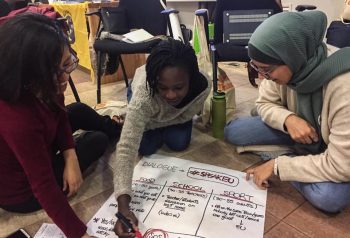 During the meeting the exchange of opinions and active participation produced results that surprised the participants themselves. Everyone agreed that there is a need to continue to claim fundamental human rights that today are deeply challenged by the different forms of populism and nationalism crossing Europe often steeped in xenophobia and racism. For everyone, the meeting was a precious opportunity to strengthen awareness of not being alone in the daily commitment to defend rights and against verbal and physical racist violence, online and offline.

We have collected in a video some interviews made during the meeting in January, the guys had to answer the following questions: